A bulk carrier was anchored outside a port awaiting a berth. During this time, the crew were involved in an abandon ship exercise where the stern-mounted lifeboat was lowered to the sea without crew members on board. After the sea entry, the lifeboat was recovered with the hoisting wire.

Once the lifeboat was back in position on its launching ramp, a navigation officer entered from the stern door to restore the release system that locks the hook onto the securing ring. Another officer was crouched down taking photos at the door to keep a record of the event, as shown in the reenactment photo.

As the officer inside the lifeboat worked on resetting the release system, he tried to insert the safety pin; the last step in the reset process. He was unable to fully insert the safety pin, and as he was trying to do so the hook was suddenly released and the lifeboat moved down about two metres on the ramp. This sudden movement caused the officer at the doorway to lose his balance. He fell to the deck six metres below, without a safety harness. 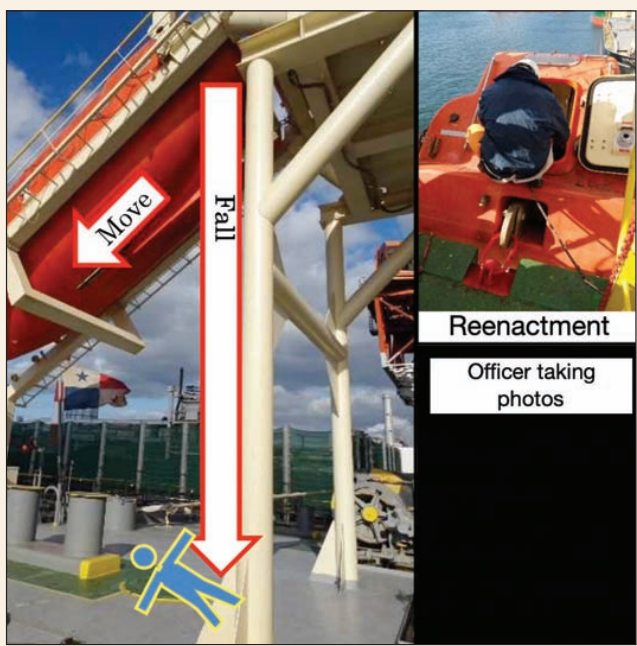 The victim was transferred by helicopter and ambulance to a local hospital but he was pronounced dead by an attending physician. The cause of death was confirmed as brain contusion.

l This crew seemed to do everything right, until everything went wrong. Lowering the lifeboat to the sea and recovering it without crew on board reduces risks and bad outcomes. Despite this, an unsafe act with lethal consequence occurred in what appeared to be a secure and safe environment.

Some environments appear safe yet they really are not so. In this case the lifeboat was recovered and was in its final stowed position. But it was not yet locked in place and the victim was in a precarious location without fall protection.

Editor’s note: Although statistics of lifeboat drill injuries and fatalities are incomplete, we hear anecdotally that accidents related to these drills continue to happen almost every year. The fact that lifeboat drills intended to save lives cause a level of fatalities and injury that seem to outnumber those of actual shipwrecks is certainly a cruel irony. As early as 1994, this situation was serious enough for the Oil Companies International Marine Forum (OCIMF) to conduct a survey into lifeboat accidents among their membership. Since then, the struggle to find solutions continues; each new solution seemingly setting the stage for new risks. In 2008, an article by this Editor appeared in Seaways Magazine, documenting the ‘lifeboat imbroglio’ as it was at the time. It is linked below for interested readers Lifeboat Imbroglio

A day in the life of a leader: NW England & N Wales 50th anniversary event