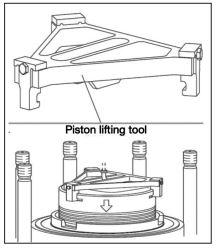 The two engineers engaged in the work each had a portable VHF radio and they communicated to each other in a language not understood by the chief engineer. Although he was supervising the operation, he himself did not have a VHF radio.

It took about an hour to stow the stuffing box. Once it was tightened in position, the chief engineer instructed the crew to clear all the tools, clean the surfaces and exit the crankcase. Both the engineer and the technician exited the rankcase but the oiler remained inside to clean up the area.

Soon after, the chief engineer instructed an engineer to turn the engine using the turning gear. The other engineer dropped the piston lifting tool. A loud noise was heard; the piston had dropped inside the crankcase. The oiler who had remained inside the crankcase was found unresponsive in the sump tank of the main engine. Emergency procedures were taken but the oiler was declared deceased before his arrival at the hospital. 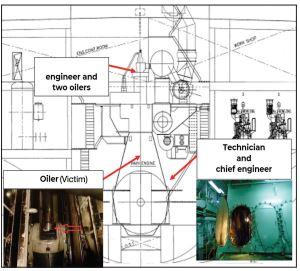 The investigation subsequently found, among other things, that: