A passenger vessel was under pilotage and the bridge team were preparing to dock the vessel at pier 3, port side to, on a heading of about 352°. Another passenger vessel was already berthed at a parallel dock on the starboard side. Wind was fresh at about 25 knots from the east and the pilot advised the Master that they would need to stay well to windward for the approach. The vessel’s port shaft was inoperable at the time.

Two tugs were made fast on the starboard bow and quarter. As the passenger ship started the turn to port its speed was less than 3 knots and the Master, as planned, took the con for the docking. As the turn progressed, the pilot told the Master he would order the tugs to pull away from the dock to slow the approach.

The Master was using bow and stern thrusters to manoeuvre into the space, as well as helm and the starboard engine, but sometimes these movements were in contradiction to the tug’s efforts. Within about nine minutes of the Master taking the con the port side of the vessel touched the extended mooring dolphins at the south end of the pier and the catwalks that were in place there collapsed into the water. Approximately 45 minutes later the vessel was safely docked without further incident. Although no injuries had been suffered, damages to ship and shore infrastructure were estimated at US$3.7 million. 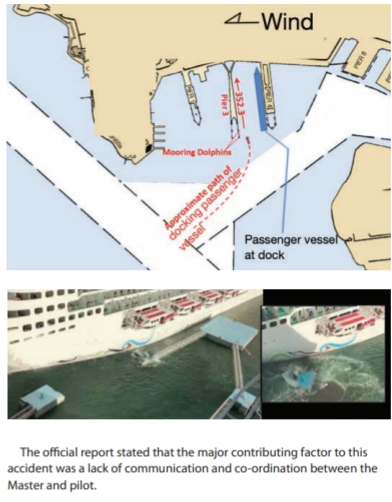