A tanker was port side to at a dock and crew were installing the portable gangway. Once the gangway was in place between the ship and the dock, a crew member walked to the middle of the gangway and removed the four wire slings, motioning to the crane operator to heave up the rigging, which was connected to a single lifting ring.

During the lift, one of the loose slings became entangled between the steps of the gangway resulting in its sudden movement. The crew member immediately signalled to the crane operator to cease heaving, which he did. The wire sling was removed from the step and the slings were recovered without further issue. 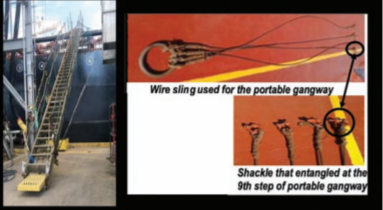