container ship under way was stopped and drifting at sea due to port congestion at the next  destination. The OOW was supported by another crewmember as lookout. The vessel was drifting sideways towards the east under the influence of the westerly wind. At 03:10 the lookout reported spotting a small vessel on the radar 6 to 7 nm away and fine on the starboard bow. About 13 minutes later, this target now 3.8nm away, was plotted by the lookout.

At 03:30, the lookout operating the radar reported to the OOW, who was occupied with other tasks, that the target was showing a small CPA. The OOW was not concerned; he assumed, correctly, that the target was a fishing vessel. His expectation, although flawed, was that fishing vessels usually altered course and would keep out of the way, especially as the ship was drifting. Meanwhile the lookout was now using a red laser pointer directed at the fishing vessel to warn its crew of their presence.

At 03:50 the OOW became concerned that the fishing vessel was getting too close and did not appear to be altering course. At 03:55 a relief OOW arrived on the bridge and spent a few minutes familiarising himself with the ship’s situation. He then went to the electrical equipment room behind the bridge with the OOW on duty to investigate a water leak that had developed there during the night.

The fishing skipper, who had left the wheelhouse for other tasks, arrived and put the engine in reverse, backing away from the container ship. It soon became apparent that the watertight integrity of the hull was intact. The skipper then attempted to contact the container vessel by VHF radio, but because the communication antenna had been damaged this was unsuccessful. The crew then severed the fishing line and departed the scene, heading for port.

The investigation found that, although drifting, the container vessel was nevertheless considered to be a power-driven vessel underway and was therefore required to follow the Colregs and take the  appropriate action to avoid a collision, which it did not. The container vessel’s bridge crew had detected and were plotting the progress of the fishing vessel on their radar. They had correctly identified the target as a crossing vessel, but it did not occur to them that their vessel was the give way
vessel.

The bridge crew were working on two false assumptions.

The fishing vessel’s skipper made no attempt to sight the container vessel after noticing it on the radar at 4nm distance because he was occupied with other tasks elsewhere on the vessel – no one was in the wheelhouse.

Another important finding of the investigation was that there is mounting evidence showing a  compromise in crewing levels aimed at keeping small fishing vessel operations economically viable. This in turn is resulting in fishing crews either not achieving full compliance with national and international legislation or operating when fatigued. Either way, the result will be a higher risk of these vessels being involved in collisions or groundings. 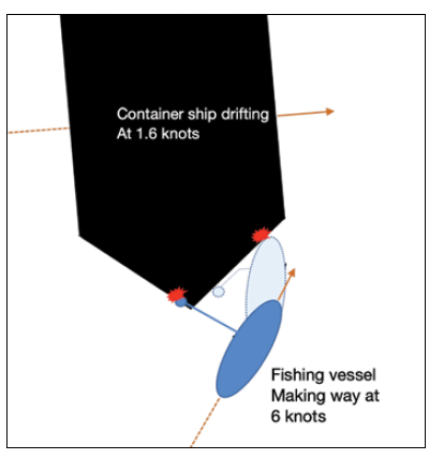