A double-ended ferry that ran between two ports, Red and Blue, was underway towards Blue port in fog. The ferry had a central bridge and control consoles at either end which allowed it to run between the two ports without having to turn 180°.

For navigation purposes, the designated bow of the vessel changed with the direction of travel; the ‘Blue end’ being the bow on passage to Blue port and the ‘Red end’ being the bow on passage to Red port. A manual switch on the consoles allowed the electronic chart system (ECS) to display the correct heading. The Master had the con during the passage and stood next to the helmsman in front of the radar and the ECS at the Blue console.

Another officer and a dedicated lookout were also on the bridge. The officer was standing at the Red control console at the other end of the bridge and used the radar and ECS to provide the Master with navigation and collision avoidance information. The lookout was stationed on the port bridge wing. As the ferry approached Blue port, the helmsman was having difficulty maintaining the required course, and the ferry started to swing to port in the channel. He immediately raised his concerns and the Master decided to take control of the vessel’s steering and propulsion (diagram 1).

As he did this, the visibility reduced to less than 200 metres. The assisting officer remained at the other end of the bridge and continued to relay positional information and messages from the deck lookout, whose radio calls were becoming more frequent and urgent. The Master managed to arrest the vessel’s swing briefly but the ferry started to swing to port once again and the ferry left the inner fairway to the east. At this point the visibility reduced still further and the bridge team were no longer able to visually identify the shoreline or navigation marks.

By now the vessel had turned through about 220° from its original heading and was stopped very briefly in the water, as in diagram 2. The Master decided to abort the berthing and manoeuvre the ferry back into the channel and out of Blue port. Believing he was still in the same orientation as before, he put the propulsion system astern and ran to the Red end of the bridge and immediately increased the propulsion power.

Some of the report’s findings include: 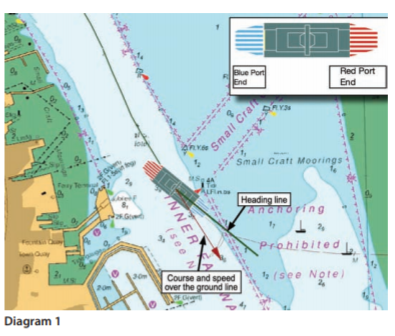 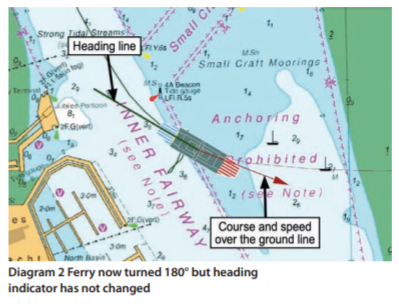