The multi-layered art of navigation

Route monitoring and collision avoidance can be assisted by ECDIS and radar, either operating as standalone workstations or as components of a wider Integrated Navigation System (INS). Antonio DiLieto, a senior instructor at CSMART, explains how to choose the right combination for the situation at hand

So-called radar and chart ‘overlays’ are a key capability of an INS. The purpose of the INS is to enhance safe navigation by integrating the different functions needed to avoid geographic, traffic and environmental hazards. By combining and integrating radar and ECDIS functionalities, an INS helps the navigator not only in terms of route monitoring and collision avoidance, but also by enabling them to monitor the integrity of the navigation sensors onboard.

Let us explore how using different layers on the INS can add value in three different scenarios:

ECDIS route monitoring can be enhanced by adding a radar video layer as an ‘underlay’. This allows the navigator to compare – at any point in time – the actual exposed part of a dry area, or an isolated danger which uncovers at low water, with their positions as shown on the Electronic Navigational Chart (ENC).

On ECDIS, the ENC will always be displayed with priority over the radar layer, so doing this will not affect the full ECDIS monitoring capability. The radar layer will also not obscure ENC features like coastline, awash rocks, or dry areas at low water.

Having the radar target echoes as an underlay to the ENC may also enhance the ECDIS route monitoring capability. This allows the navigator to consider actual traffic if planning a deviation from the planned track.

By combining and integrating radar and ECDIS functionalities, an INS helps the navigator not only in terms of route monitoring and collision avoidance, but also by enabling them to monitor the integrity of the navigation sensors 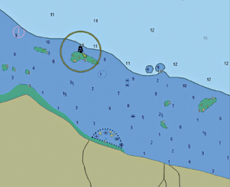 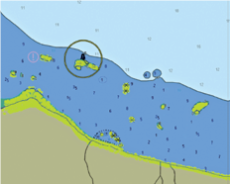 The use of radar for collision avoidance can be enhanced by setting an ENC layer with the planned track as an underlay on the radar. This can boost the navigator’s ability to evaluate options and make decisions based on the sea room available. Be careful; the radar video may obscure ENC features such as the charted coastline or an awash rock symbol.

To avoid excessive clutter on the radar display, you should carefully consider the amount of ENC information to be included in the underlay. In doing so, the navigator is not constrained by a minimum required display of ENC features. This is different from ECDIS route monitoring, which requires standard display as a minimum.

Monitoring the integrity of other sensors is a key functionality of an INS. For example, using ENC data as an underlay to radar displays can help detect any bias or failure from position and heading sensors.

A mismatch between the radar video (coastline, targets, navaids) and the corresponding ENC features indicates that there is a GNSS position bias. The planned track will also be affected by the same shift. If this happens, the navigator should rely solely on the radar video. They should deactivate the ENC layer and the planned route, which might be misleading. Instead, they will have to rely on parallel indexes (PIs) on the radar display and plotting positions manually on ECDIS using radar distances and compass bearings.

If there is a GNSS failure, the INS might automatically switch to Estimated Position mode. In such a mode the mismatch between the radar video and the ENC layer may not be immediately visible, but it may grow over time, depending on the accuracy of speed and heading inputs.

There is no single best way to use navigation layers on radar displays and ECDIS. Every situation will require dynamic adaptation to specific combinations of settings. However, there are some guiding principles to help you take advantage of navigation layers while operating an INS:

Parallel Indexing and Lines of Position - Drawing the line