If I would sum up how mentoring impacts cadets and young seafarers, it would be: "When someone believes in them, their performance skyrockets!"

I started sailing when I was 19 years old: thin, starry-eyed, fresh-out-of-training deck cadet. I found wonder in everything we do. From the mundane– the liberty of choosing the color for second coating of paint– to the fascinating night navigation and the excitement of tomorrow's uncertainty; it all filled me with glee!

That enthusiasm caught the attention of my captain, second officer, and third officer. I was then put under the care of second officer Andrey as his "deputy safety officer" (a rank they just conjured to boost my zeal, and it worked). I enjoyed the confidence he gave to me when he delegated me to discuss during safety drills and demonstrations.

Captain Balabko also then assigned me to Third Officer Salacup who is both our navigation and radio officer. Under his tutelage, Third taught me the basics of the Global Maritime Distress and Safety System (GMDSS). The day after our quick discussion, I got to present what I learned to Captain, 2OFF, and COFF. I was both ecstatic and nervous! All went superb!

My first vessel catapulted my sailing career. And as fate may have it, its name was M/V "GENESIS". Genesis, the beginning, The Old Testament's first book. Providential!

Then comes second contract on the same vessel. Armed with the same zeal, I received my very first written reccommendation of promotion for third officer from Captain Tkachuk! All with the back up of 3OFF Tapuroc, 2OFF Javier, and Chief Officer Borys.

And now, my recent contract in M/V "GWEN" former "BBC FORTUNE", where I embarked as an ordinary seafarer (O/S). I spent nearly eleven months in this floating community yet time went by rapidly. Filipinos have a saying for this: Mabilis ang kontrata kapag masaya ang kasama (the contract is fast if people are in harmony). I would forever be grateful to Captain Ruslan, Captain Krinistkiy, Chief Officer Sergiy, Chief Officer Oleksandr, 2OFF Dmytro for training me to trust myself. They saw something in me that I never saw in myself. They supported, inspired, motivated, encouraged, and even at times tolerated my mistakes. My crewmates were also supportive of my engagements. It is  in "GWEN" that I have achieved great heights: advisory to Human Rights at Sea, appointment to The Royal Institute of Navigation- Younger Members' Group, inclusion in the International Maritime Organization World Maritime Seafarer Profiles, and many others!

As I write this, I cannot help but smile. I realized how I am a sum of all the people with whom I worked with and who trusted my capabilities.

And it is because of them that I will continue on advocating for a fairer future for all seafarers especially cadets and young seafarers! It is essential that these young bloods be integrated in the maritime operations (bridge/ engine/ galley) and in the wider maritime industry!

However, it is important not to assign critical tasks as they may not be fully competent yet. And when they mess it up, their confidence may diminish. Instead, start with small tasks to build up their trust in themselves. Then assess if they can take on more roles with greater responsibilities. Remember to give them feedback, both positive and negative for them to improve. The important thing is they feel that they are a part of a greater whole; that someone sees them more than their current job descriptions— that they can be more!

Seafaring is not besting others, rather it's relating with them. It's already a hard world. Be kind;  extend a hand to cadets who you see are struggling on the mooring or is having a hard time on opening a screw only to realize they're turning it the other way. These people will soon be the leaders of the maritime industry. They may not look like it yet but trust me, they're going there. 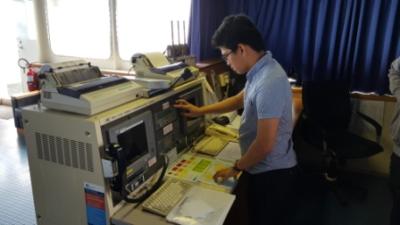