Under Keel Clearance (UKC) is a complex topic, and one with many aspects to it – but it is a vital one, as it comes down to what mariners can do to avoid ships grounding in shallow navigation channels. From calculating static UKC to understanding squat and honing UKC management techniques, Dr Tim Gourlay explains the basics.

The first aspect to consider is the static Under Keel Clearance – that is, how much water is left between the bottom of the ship and the seabed. This is calculated as the available water depth, including tide, minus the draught of the ship (see Figure 1 on the next page). If the ship was drifting along the waterway with no vertical movement, this would be its minimum clearance from the seabed.

However, grounding risk is not just about the water depth and the ship draught. The ship also has its own vertical motions, which need to be taken into account. Squat, wave-induced motions and heel each cause parts of the ship to move closer to the seabed. All this means that it is possible for ships to run aground even when the water depth is larger than the draught (positive static UKC). To avoid this, navigators need to allow for vertical motions of the ship and combine them into the overall UKC management plan.

Understanding squat
Squat is the downward vertical movement and change in trim caused by a ship’s own wave pattern. The wave pattern changes according to the speed of the ship.

The easiest way to understand squat is to imagine that ship is in a fixed position and that the water is streaming past it at a steady speed. This is how ship models are tested. The Bernoulli equation tells us that when the flow speed is high, the pressure is low, and vice versa. In shallow water, the presence of the ship and seabed accelerates the flow, decreasing the pressure on the ship and pulling it downwards.

On the next page, Figure 2 shows the local flow velocities and free surface height around a Panamax bulk carrier travelling at 12 kt in shallow water. At the bow, there is a stagnation zone with low flow speeds and high pressure. This high pressure translates into an elevated free surface. At the forward and aft shoulders, the water is accelerated, causing low pressure and a lowered free surface.

Overall, the presence of the ship causes a generally accelerated flow and lowered free surface. The ship then sinks downwards. It will also change its trim depending on the relative magnitudes of the wave troughs at the forward and aft shoulders. Vessels with large hull curvature at the forward shoulders will have very low pressure there, and a resulting bow-down dynamic trim.

For bulk carriers and tankers, the greatest squat will tend to be at the bow, while for LNG carriers and container ships it may be either at the bow or the stern. Either way, be aware that the propeller may be vulnerable.

Dredged channels, and especially canals, create a blockage effect that increases the flow velocities and pressure changes around the hull. In dredged channels, squat will be 5-10% larger than the standard formula. In canals, it will be approximately double the formula, depending on how confined the canal is.

Roll with it
In long-period swells, grounding can occur even with large static UKC values. The important motion components are roll, heave and pitch, each of which produce vertical motions of the ship. Once you know the angle of roll and the distance from the ship’s centreline to the turn of the bilge, or the tip of the bilge keel (labelled as ‘y’ in the diagram in Figure 3 above), a simple trigonometrical calculation allows you to work out the increase in depth, and therefore the decreased UKC.

This method may also be used for wind heel, which is primarily important for car carriers, container ships and LNG carriers. It may also be used for heel due to turning, which is primarily important for container ships. There are standard methods for predicting heel angle due to wind or turning. In order to predict which wave conditions are likely to produce large rolling, it is helpful to know the ship’s natural roll period. This is the period that a ship would roll at, if pulled over to one side and then released. Large roll angles occur when the wave period is close to the ship’s natural roll period. 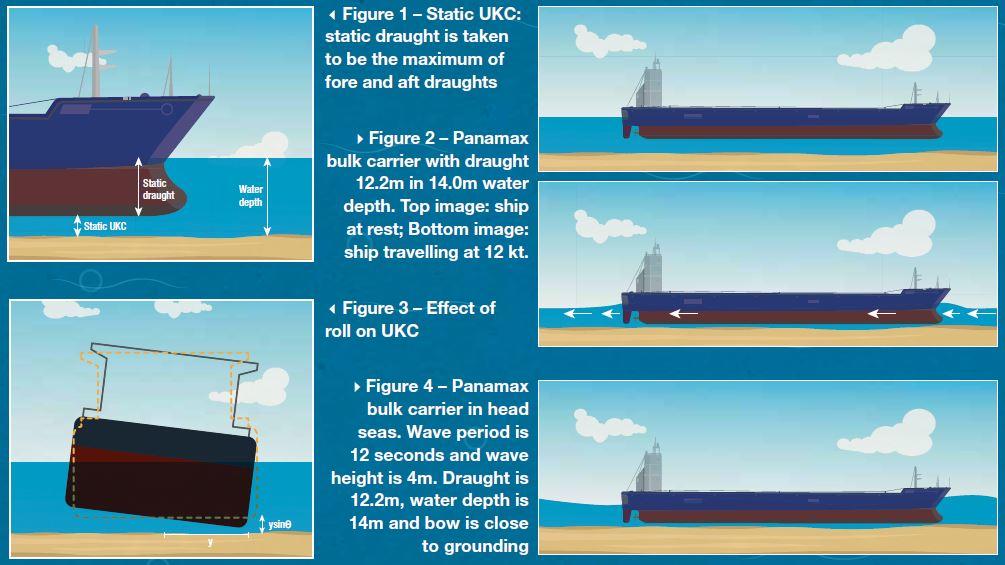 Heave and pitch
Waves in ship navigation channels, particularly head seas or following seas, produce pitching motions which can make the bow or stern vulnerable to grounding. The ship’s centre of gravity also moves up and down, which is the heave motion. Depending on the phasing between heave and pitch, the bow or stern may have larger vertical movement.

In practice, the port-specific calculations tend to govern the transits, as these should include detailed modelling of the local conditions. However, Masters’ knowledge of the behaviour of their own ships and their UKC judgement are an important part of the decision-making process. The good judgement of the Master is especially important in ‘unusual’ environmental conditions.

It is also useful for the crew to have a squat table readily available on the bridge. This squat table should be ship-specific, as, for example, wide-beam ships squat more than narrow-beam ships.

UKC tables
For ports where metocean conditions (especially swell) are variable, but simplicity is important, paper or spreadsheet UKC tables may be used. These give the required static UKC for each ship class as a function of the most important input variables (typically swell height and period).

UKC software
UKC software allows more inputs and more specific UKC modelling. It includes allowances for squat, heel and waveinduced motions, and facilitates the inbuilt inclusion of tide and swell predictions and real-time measurements. The increased usage of UKC software internationally should help to improve safety and efficiency of ships in navigation channels.

The right ship for the right port

Stuart Edmonston, Director, Loss Prevention, UK P&I Club
The previous article underlines how important it is for Master and port to be satisfied that there is sufficient UKC according to their specific calculations. However, that also depends on making sure that the right ship is calling at the right port in the first place.

Right at the start of the ‘fixing’ process, when the brokers representing the shipowner and charterer are negotiating potential new business, both sides should be very clear about the dimensions of the ship being fixed. This sounds like common sense, but it is amazing how often the relevant dimensions are misunderstood or miscalculated. The relevant length overall, breadth, depth, load draughts and air draughts should be recorded clearly and unambiguously in the fixture note. The shipowner should be explicit about any existing policies or parameters regarding UKC. There is absolutely no room for any misinterpretation.

Where brokers fix the ship on a voyage to a named port or place, they should work openly and constructively with the charterers to ensure the ship can actually reach the port or terminal, use it, and return from it without being exposed to any danger which cannot be avoided by good navigation and seamanship. It would be prudent for the charterers to carry out their own due diligence: properly check and re-check safety parameters of the port or terminal with the local agents and/or the P&I Club Correspondents. Have there been any recent incidents and/or litigation involving UKC problems in the recent past, and, if so, what (if any) lessons have been learnt?

All this should happen before a ship is employed. Even so, sometimes the minimum (UKC) requirements are brought into question. This might be because charterers request to reduce the UKC parameters once the ship is already in operation, or it becomes clear that the owners’ requirements cannot be met (for example due to restrictions imposed by port authorities or the Pilot). What happens then?

In this situation, the Master should liaise closely with the company’s DPA and P&I Club. The Master should properly record and document their UKC calculations and carry out a thorough risk assessment, taking into account all stages of the voyage to and from the berth. This risk assessment should include relevant controls, such as additional bridge manning, minimum speed, tug assistance, soundings and position monitoring. The latest sounding information, including the nature of the bottom, should be ascertained directly from the local authorities and/or terminal facilities. Consideration should be given to Noting Protest in the normal way.

Taking time to research the safety risk in advance will help to ensure that the right ship is fixed for the proposed voyage, and this helps to reduce the risk of navigation incidents and potential litigation in the future.

202306 - Too many negative factors can give a negative outcome