A refresher course in the operation of survival craft and rescue boats was being conducted at a marine training centre. One of the practice sessions was an exercise in rescuing survivors from the water using a lifeboat.

The lifeboat, which was also approved for use as a rescue boat, was a totally enclosed model with side hatches with a maximum capacity of 26 persons. The weather at the time of the occurrence was calm, with light winds and good visibility and a water temperature of close to 5°C.

The lifeboat is classified as ‘self-righting’; that is, if the boat overturns, it does not remain upside down. The self-righting properties remain even if the lifeboat is filled with water and is fully loaded, provided all those on board are secured in their respective places with their seat belts attached. The manufacturer’s operation and maintenance manual emphasises this point.

The lifeboat was launched and all seven participants on board were seated on benches and strapped in with four-point seat belts while it was being lowered. After the launch, the participants released their belts and the five hatches in the lifeboat’s superstructure were opened. The lifeboat was then released from the hooks and the boat was driven a short distance into the harbour for the retrieval exercise.

Instead of pulling a real person out of the water, a lifebuoy was used as a simulation. All participants were to be given the opportunity to practise driving the lifeboat as helmsman during this part of the exercise. Having pulled up the lifebuoy for the first time, a change of helmsman took place. The boat was stopped and drifting, and the person who had been driving climbed down from the helmsman’s chair and went to the port side. The person who was to take over stood on the starboard side but went to the port side to climb up to the helmsman’s chair because of an obstruction on the starboard side. In order to allow this new helmsman enough room to get over to the port side, those who were sitting in the stern had to get up on the benches. Once the new helmsman was over on the port side but not yet in the steering position, the lifeboat heeled heavily to port and water began streaming in over the edge of the open side hatch.

Three people ended up in the water, while the four others were able to cling to the lifeboat, which was now lying with a heavy list to port and half filled with water. Everyone was quickly rescued by nearby small boats and no one on board suffered injuries. The diagram below and the accompanying description show positions at the time of the accident: 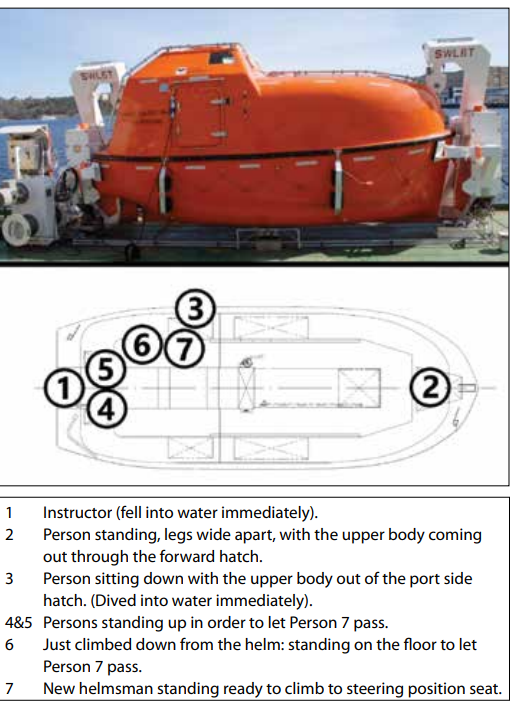 The lifeboat complied with applicable IMO stability requirements. Nevertheless, the investigation shows that, under certain conditions, this type of lifeboat has limited reserve stability. Consequently, relatively small forces are able to generate large angles of heel. Under certain conditions, for example when lightly loaded to about one quarter capacity as in this case, lifeboats of this type can take on water and heel over if the side hatches are open. It is reasonable to assume that other lifeboats of similar types and sizes may have similar stability properties.

The offi cial investigation found, among other things, that;

Editor’s note: This report is reminiscent of another accident that this editor investigated in 2003 while in the service of the Transportation Safety Board of Canada (TSB). The incident involved a much smaller enclosed life boat but the stability problems were chillingly similar to this present case. One of the report’s fi ndings as to risk:

202306 - Too many negative factors can give a negative outcome