A vessel berthed at a terminal and some port personnel noticed that one of the monkey fists used on a heaving line was particularly heavy. The monkey fist was inspected, and it was discovered that although the outer casing was made from rope, the inner core was of compacted sand surrounding a large steel nut contained within a cotton casing. The total weight was 740g.

The vessel and company were advised and there was an internal investigation. It transpired that the vessel had five other heaving lines with monkey fists on inventory. After testing with a metal detector no metal parts were found and all weighed less than 500g, which is an accepted maximum limit according to best practice and certain codes. It would appear a crewmember had made the monkey fist on his own initiative, and this escaped supervision or detection.

The company took the initiative to have all monkey fists replaced by a sachet type, as illustrated. The sachets are made from old fire hoses, filled only with sand, and weigh about 400g. This format allows easy auditing to check for heavy (metallic) objects inside. Also, warnings were posted near mooring stations on the specifications of monkey fists, with the hope of maintaining awareness on board. 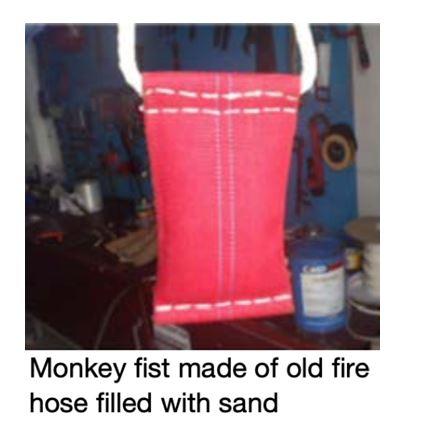