202161 Forklift accident with one injury and one fatality

A roro vessel was making a routine planned stopover and the bosun was using the forklift truck for a routine job of moving tools and small containers. Later that same day, several other deck crew members also used the forklift for various tasks.

Later on, while most crew were at coffee break, a loud bang was heard. Various crew members went towards car deck 2 to identify the source of the sound. The securing barrier on car deck 3 was found broken, and the forklift had fallen from car deck 3 onto car deck 2. The forklift was lying overturned on the ramp with a crewmember inside the forklift cabin.

This crewmember was injured but responsive. Another crewmember was found inside the overturned forklift basket and he was unresponsive. Crew members began first aid. An ambulance arrived and the paramedics attended the unresponsive victim. He was transported to hospital but later declared deceased.

The crewmember that was in the forklift cabin later recovered, but he did not remember events from the accident. The company investigation found that the forklift had been operated with the victim in the basket and the forklift mast extended to the top. It was also found that the crewmember operating the forklift truck did not have the training or
authorisation to operate the truck. There was no dedicated procedure in the company’s SMS providing requirements for the access and operation of the forklift. Neither was there any specific procedure for maintaining, recording or managing crew members’ qualification and experience for operating a forklift truck. 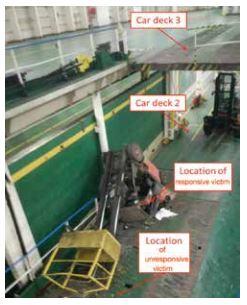