The crew of a car carrier were preparing for departure, having spent two days loading cars. There were 2,420 used vehicles on board. While the crew were securing vehicle ramps, the chief mate noticed smoke coming from a ventilation housing for one of the exhaust trunks. Upon further investigation, crewmembers discovered a fire on deck 8, which was one of those that had been loaded with used vehicles.

The crew attempted to fight the fire but were repelled by heavy smoke. Shoreside fire department teams soon arrived and relieved the crew. The Master consulted with the fire department, and with their agreement had CO2 from the vessel’s fixed fire-extinguishing system released into decks 7 and 8. The crew were then evacuated.

The CO2 was ineffective for a number of reasons; not least that the dampers for decks 7/8 were ineffective or not adequately secured. This gave the fire continued access to oxygen, negating the effectiveness of the CO2. The fire continued to spread to higher decks and the accommodation. Shoreside firefighters entered cargo decks with fire hoses in an attempt to dowse the flames. Suddenly, an explosion occurred and nine firefighters were injured, five of them seriously. Responders subsequently adopted a defensive strategy, cooling external exposed surfaces. The fire was finally extinguished eight days later.

The car carrier and its cargo of used vehicles were declared a total loss, an amount estimated at $40 million.

The investigation found, among others, that:

The fire was likely caused by an electrical arc or component fault in one of the vehicles. The company’s established vehicle loading and battery securement procedures call for a properly disconnected and secured battery for all vehicles loaded on the vessel. These procedures were not followed by the longshoremen preparing and loading vehicles onto the car carrier. Neither vessel crew nor shore supervisory personnel corrected this deviation.

The company’s ‘Vehicle Lashing Inspection Procedure’ identified the need to ensure that all vehicles loaded on board the vessel had disconnected batteries, but did not provide a process to do so. 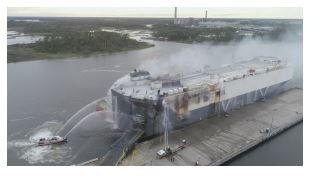 This is an interesting report with more lessons learned than can be enumerated in this short MARS format. Readers are invited to read the report in its entirety, available online at the NTSB webpage https://www.ntsb.gov/investigations/Pages/DCA20FM020.aspx .