Amendments to MARPOL Annex V adopted at MEPC 70 will enter into force on 1st March 2018. These include criteria for determining whether cargo residues are harmful to the marine environment and entries in the garbage record book.

Discharge of garbage outside special areas
A new paragraph 3 is added as follows:
Solid bulk cargoes as defined in regulation VI/1-1.2 of the International Convention for the Safety of Life at Sea (SOLAS), 1974 , as amended, other than grain, shall be classified in accordance with appendix I of this Annex, and declared by the shipper as to whether or not they are harmful to the marine environment

Discharge of garbage within special areas
Paragraph 1.2.1 is replaced with the following:

Garbage Record Book - a new form of the Garbage Record Book has been included in appendix II to MARPOL Annex V. It is in two parts - Part 1 for all garbage other than cargo residues for all ships and Part II for cargo residues applicable to ships carrying solid bulk cargo. This includes entries for position or port, garbage category (HME or non-HME), amount discharged to sea or reception facilities, and start and stop positions for sea discharge.
Placards and Garbage Management Plans should be revised as necessary

UK P&I Club issued Risk Focus - Hatch Covers. This brochure has been designed to help those involved in inspecting, testing and evaluating the weathertight integrity of hatch covers in making well informed decisions, and assist owners and shipboard personnel in maintaining their hatch covers and closing appliances in line with good industry practice and standards. 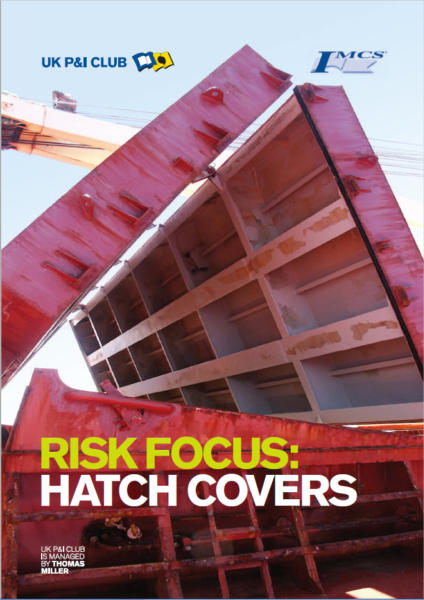 DNV GL is receiving an increasing number of requests regarding the carriage of cargo on deck and hatch covers of traditional bulk carriers. DNV GL Technical and Regulatory News provides you with the information you need when preparing a vessel for deck cargoes. Information available HERE

Preparation of cargo holds for the next intended carriage is a critical element of bulk carrier operations, requiring careful planning and competent execution. A lack of proper preparation not only leads to claims related to cargo quality, such as contamination, water ingress or shortage claims, but also contractual claims relating to failed or delayed surveys, off-hire claims and charter party disputes.
This guidance from SKULD P&I gives practical advice, including case studies, to everyone involved in the ‘cargo chain’ from the chartering and operations team ashore, to the Master, Chief Officer and crew on-board

International regulations aim to ensure safe shipment of cargoes and the protection of the marine environment from harmful pollutants.
These regulations are intended to control risks and the measures that must be taken by shippers depending on the physical, human health and environmental hazards of the material transported.

The International Council for Mining and Metals (ICMM) have produced "Hazard assessment of ores and concentrates for marine transport" document which provides general guidance for mining and metals industry personnel on the hazard classification requirements for marine transport of O&Cs. It is intended as general classification guidance and is not a substitute for expert advice.

Cargo Residues Disposal
Preparation of cargo holds for the next cargo is a critical element of bulk cargo operations. Disposal of the residues of the previous cargo and the wash water is now regulated by the revised MARPOL Annex V which came into force on 1st January 2013. This provides restrictions on the disposal of cargo residues which remain on deck or in the holds after discharge. SKULD P&I Club has produced “Guidance on disposal of cargo residues in line with MARPOL Annex V”.

January 2016
North P&I Club published a loss prevention briefing warning operators of the hazards associated with routine fumigation of agricultural products on ships and advises on measures to be taken in order to ensure safe process.Download the publication HERE

March 2014
UK P&I Club highlights accidents and injuries to crew members resulting from the inadvertent release of highly toxic phosphine gas or the effects of fires and explosions, both caused by the unsafe disposal of residues of aluminium phosphide following the fumigation of cargoes in transit. Download the LP Bulletin HERE

Ventilation
February 2016 - All modern bulk carriers are fitted with some form of ventilation, either natural or mechanical, which can be used to minimise the formation of sweat.
Ventilation can also be used for the removal of taint, fumigate gases, or other gases as directed by the shipper. The London P&I Club publication LP Focus addresses issues related to bulk carrier ventilation.Download the publication HERE