Tell us what you think about S-Mode

The Nautical Institute is appealing for seafarer feedback over S-Mode to help shape the future of navigational systems.

The Nautical Institute appeals for seafarer feedback over S-Mode

The Nautical Institute today announced a consultation to help assess the latest proposals for standardised navigation equipment. The latest suggestions were presented at the IMO’s 5th NCSR (Navigation, Communication and Search and Rescue) Sub-committee meeting by the Institute and other stakeholders including CIRM (Comité International Radio-Maritime), the Western Norway University of Applied Sciences, and delegation members from Australia and the Republic of Korea.

Navigators’ views are sought on the latest concept for S-Mode which is in its final stages of development before being finalised next year. This is for an ‘always on’ standardisation of key features to be adopted by the leading manufacturers of navigation systems.

NI Director of Projects, David Patraiko said: “The collaboration with industry stakeholders has taken years, however this new approach of standardisation should lead to more effective familiarisation for mariners and ultimately improve the safety of navigation.” He added: “For many years and particularly with the increased complexity of ship systems, mariners have been challenged when sailing on different ships with different manufacturers’ equipment to become familiar with systems that are so safety critical”.

The new proposal, by CIRM, focuses on:

1)    a standard approach to hotkeys

2)    the establishment of 'essential information blocks'

3)    defining a list of functions that must be accessible by single or simple operator action.

However these proposals need URGENT feedback from mariners before they become enshrined in IMO Guidance due to be finalised next year.

Have your say! Visit www.nautinst.org/knowledge to participate in three short surveys based on these proposals. They can be done individually or in groups. The groups might be bridge teams (if internet is available), officers in a shipping company or training organisation. Instructions and tutorials are available with the surveys and further background information is available including a recorded webinar and full documentation. We thank the Western Norway University of applied sciences, department of maritime studies for these surveys and the analysis.

Urgency is stressed, as these surveys will be closed on 1 June in order to compile the feedback.

Some of those involved in the S-Mode discussions now calling for consultation. 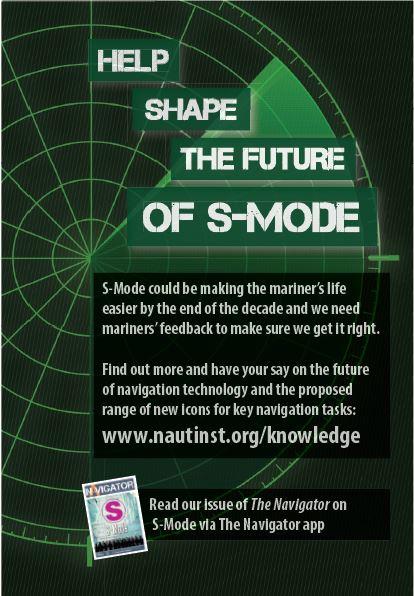 The Nautical Institute is an international representative body for maritime professionals involved in the control of seagoing ships. It provides a wide range of services to enhance the professional standing and knowledge of members, who are drawn from all sectors of the maritime world. Founded in 1972, it has over 40 branches worldwide and some 7,000 members in more than 120 countries.

Please note: The Nautical Institute takes a capital T on The

Press Release: New President of The Nautical Institute to focus on three challenges