Crew were berthing a container vessel that had just arrived in port, and linesmen ashore were placing the mooring lines on bollards. Strong winds were forecast, so the Master and pilot agreed to use 14 lines in total, including  ve headlines. Some of the bollards could not be used because they were forward of a construction fence, so all five headlines were placed on the same bollard just forward of the bow.

Later, as the vessel was discharging cargo, winds increased as expected with peak gusts near 40 knots. The bollard forward with the five headlines was torn from its base. The forward spring lines parted followed in quick succession by the seven remaining lines. The vessel drifted o the wharf and the bow struck a nearby pier. An anchor was walked out, bow thruster and main engine were brought on line and the uncontrolled drift of the vessel was stopped some 30 minutes after the bollard failure. Shortly afterwards, tugs arrived and assisted the container vessel to anchorage. 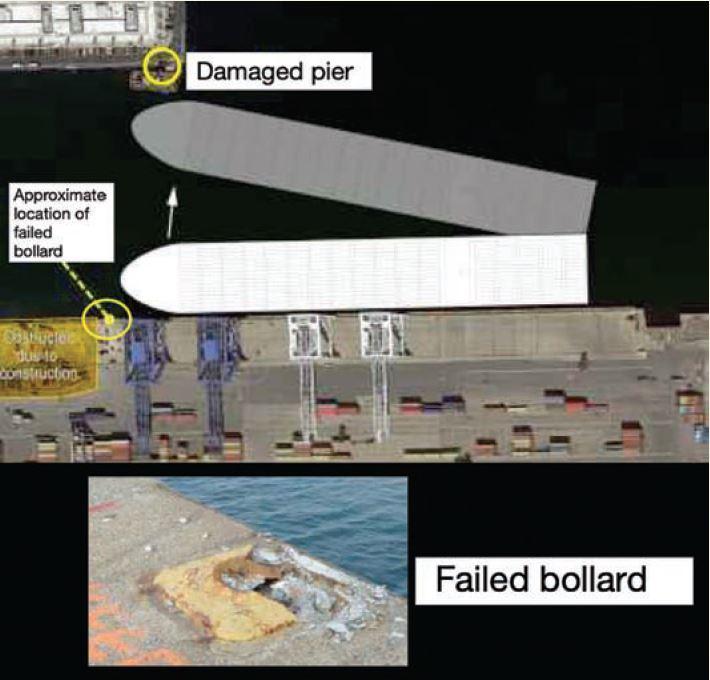 ● Mariners can never be sure of the holding power of a particular shore bollard. In this case, all forward headlines were on one bollard. Best practice is to spread the load to several bollards.

● Once one part of a mooring arrangement fails, there is a high probability of the remaining parts failing in relatively quick succession. Loads can be distributed in a way that is beyond the design capacity of the system.

● If high winds are forecast it may be necessary to take extra precautions, such as an anchor outboard, having engines and bow thruster ready, or having tugs on standby.